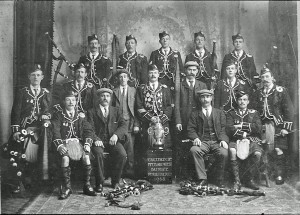 Formed in the village of Wallacestone in 1887, the band is one of the oldest surviving civilian pipe bands in the world. Although we have no photographs from the earliest days, Pipe Major John Wilson was the band’s first leader and was in charge from 1887 to 1895 when he was succeeded by Pipe Major Thomas D McLuckie. At this time the band were competing at local contests and were regular winners at the Bathgate Horticultural Society contest and are shown here with the winners trophy in 1903.

More success was soon to follow with the band winning the British Championship held at Waverly Market in Edinburgh in 1905.
Cowal Games was at this time becoming one of the best attended contests and in 1906 an Open band competition was instituted, which allowed civilian bands to compete against the top army bands of the day for the first time. In 1907 Wallacestone were to finish a very creditable fourth place at Dunoon when the Argyle Shield was won by the 3rd Bt. LRV. 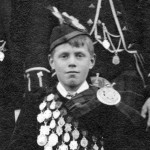 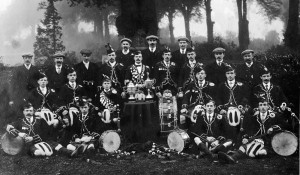 One of the band’s rising stars, piper Angus McPherson was also winner of the under 16 solo piping on the same day.
Angus can be seen here with a huge collection of piping medals on his uniform, but he left the band in 1912 when he immigrated to Australia, although he continued playing for many years in Queensland. 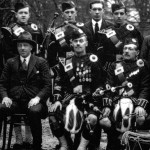 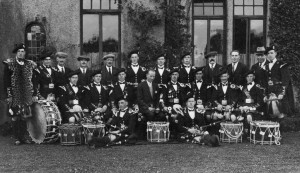 1914 saw the outbreak of WW1 as well as the untimely death of PM McLuckie. John D Sharp was promoted to Pipe Major and remained in charge for 38 years.
PM Sharp, who was a survivor of the Redding Pit Disaster, should be given great credit for keeping the band together through both World Wars and for their success at Cowal Games in 1923. The band was also given the honour of playing at the opening of the Empire Exhibition held in Glasgow 1938.
Alex Bryce, who had played on an off with the band since 1913, was the next Pipe Major, taking over from John Sharp when he retired in 1952.
Alex was only to hold the post for one year before he retired himself after an unfortunate dispute with the band committee. He was followed by Pipe Major Jim Inglis of Old Polmont and there here once again followed a period of success for the band, which also saw the band appoint a Drum Major for the first time. 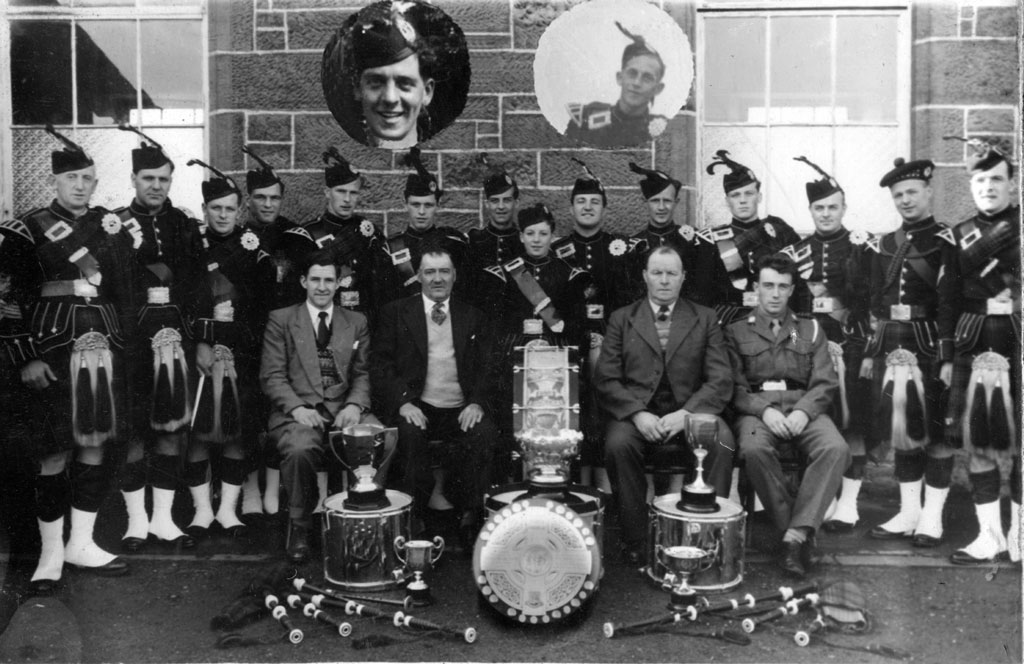 Jim Anderson was to win many major championships as Drum Major with the World title only just eluding him as he finished in 2nd place at the World’s in both Belfast and Paisley. Jim would move to the SPBA adjudicator’s panel while still holding down both the secretary and treasurers position within the band. During the 1950’s many well known names from the band’s past played with Wallacestone. Leading Drummer Jim Gray and his brother Innes, Bass drummer Bobby Davidson and his brother Willie, who only retired a few years ago after teaching many of the band’s young pipers on the practice chanter. 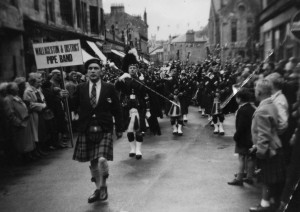 Jim Inglis carried on with the band through the 1960’s but by the end of the 1972 season, was forced to stand down due to poor health. 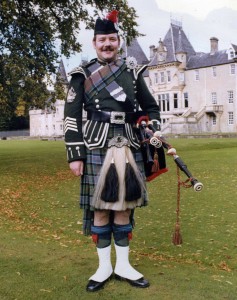 The band saw the return of  Pipe Major Thomas S Anderson. Tam, as he is better known in band circles, had played with Wallacestone as a boy along with his brothers Peter and Jimmy, before all three ended up playing with the world famous Muirhead & Sons pipe band in Grangemouth. 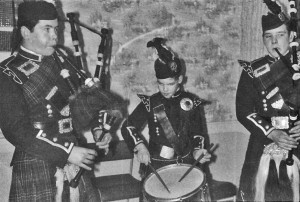 Tam’s brother, Peter immediately took on the instruction of the band’s drummers, although he remained with the Muirhead’s band until it folded in the late 70’s.

Success soon followed and in 1974 the band won both the Scottish and Cowal Championships in grade 4 and were duly upgraded. Peter returned to the band as leading drummer at the end of 1978.
The band continued to go from strength to strength and in 1980 after winning the Scottish, British, European and World Championships, it was crowned Champion of Champions in grade 2 and promoted to grade 1. The drum corps also had their best ever season being undefeated in every contest they entered that year. 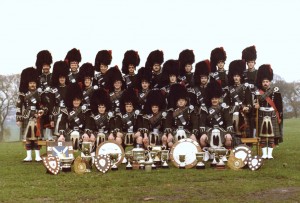 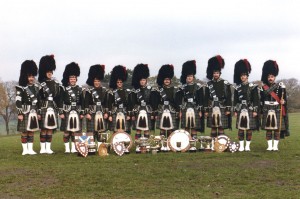 This period saw the band regularly visiting Brittany where they were invited to attend both the Festival Interceltique in Lorient and the Fete du Cornouaille in Quimper, performing alongside the famous Bagad Kemper, the pipe band of Falkirk’s twin town. The band also recorded an album, “Stirling Bridge” which is a tune that will always be synonymous with Wallacestone Pipe Band and was released on the Breton “Arfolk” label in 1980.
Since then the band has changed grades several times and has enjoyed success again in grade 2 and 3. 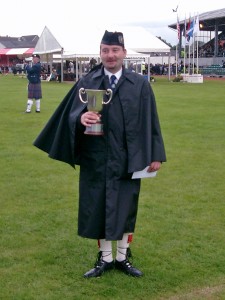 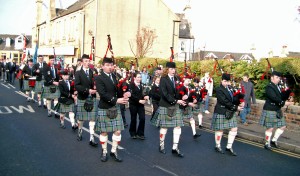 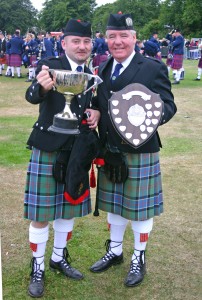 Tam retired from the position of Pipe Major at the end of 1999 and was succeeded by his son PM David Anderson, who had played with the band since he was a young boy. David continued the band’s success, his best season being in 2005 with a victory at the British Championships and top three finishes at both Cowal and the Scottish Championships. Soon after this David was forced to stand down due to work commitments and at this unexpected turn of events, Tam came out of his retirement to take charge of the band for a second period.
The band is currently competing in grade 4A and finished in second place in their grade at the British Championships held at Annan in 2010. 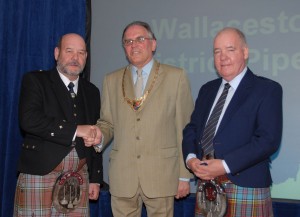 Tam and Peter continue to devote much of their time to teaching the band’s young players and were recently recognised by the local council in Falkirk for their hard work and dedication with the band over the last 38 years. 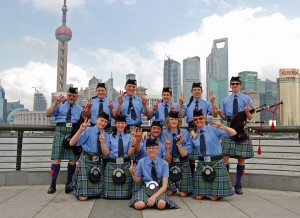 Having enjoyed a successful competition season in 2010, the highlight was undoubtedly a week long visit to China where they were invited to play at a private function in Shanghai.
In September 2011 the band appointed its current Pipe Major – Neil Henderson and  enjoyed a very successful season in 2012, winning grade 4A at Cowal Games and  promotion to grade 3B. 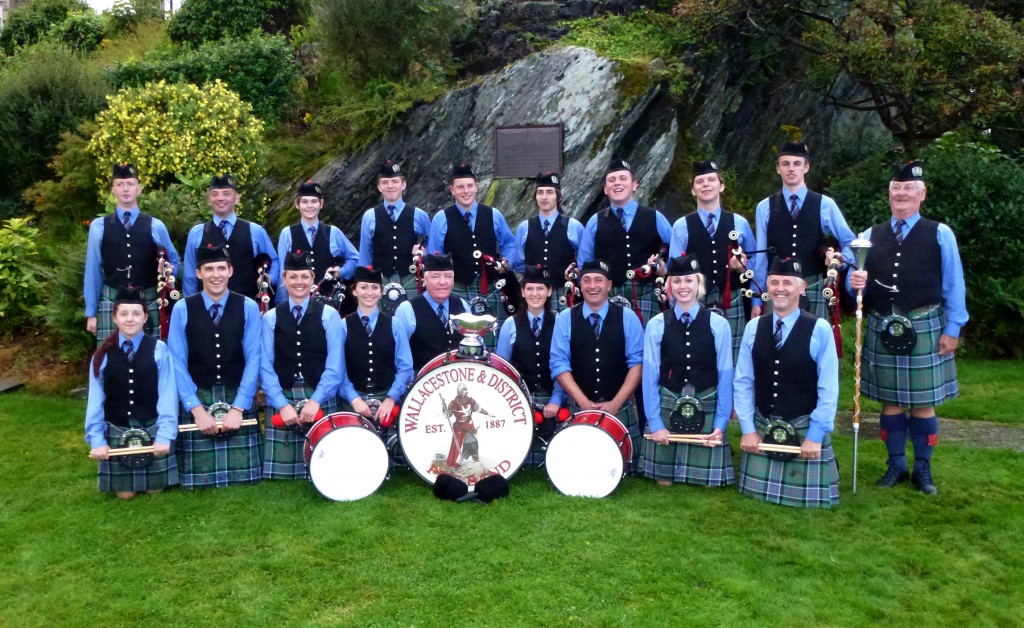 Success continued in 2013 when the band began their season by winning the British Championships at Bathgate in grade 3B. The band continued to be regular prize winners over the next few seasons and in 2016 finished in second place at both the World Championships in Glasgow and in the Champion of Champions table for the season.
This success resulted in the band again being promoted and celebrated their 130th anniversary competing in grade 3A. Another great season followed with the band finishing as Champion of Champions after victories at the UK and European Championships, once again gaining promotion to grade 2. 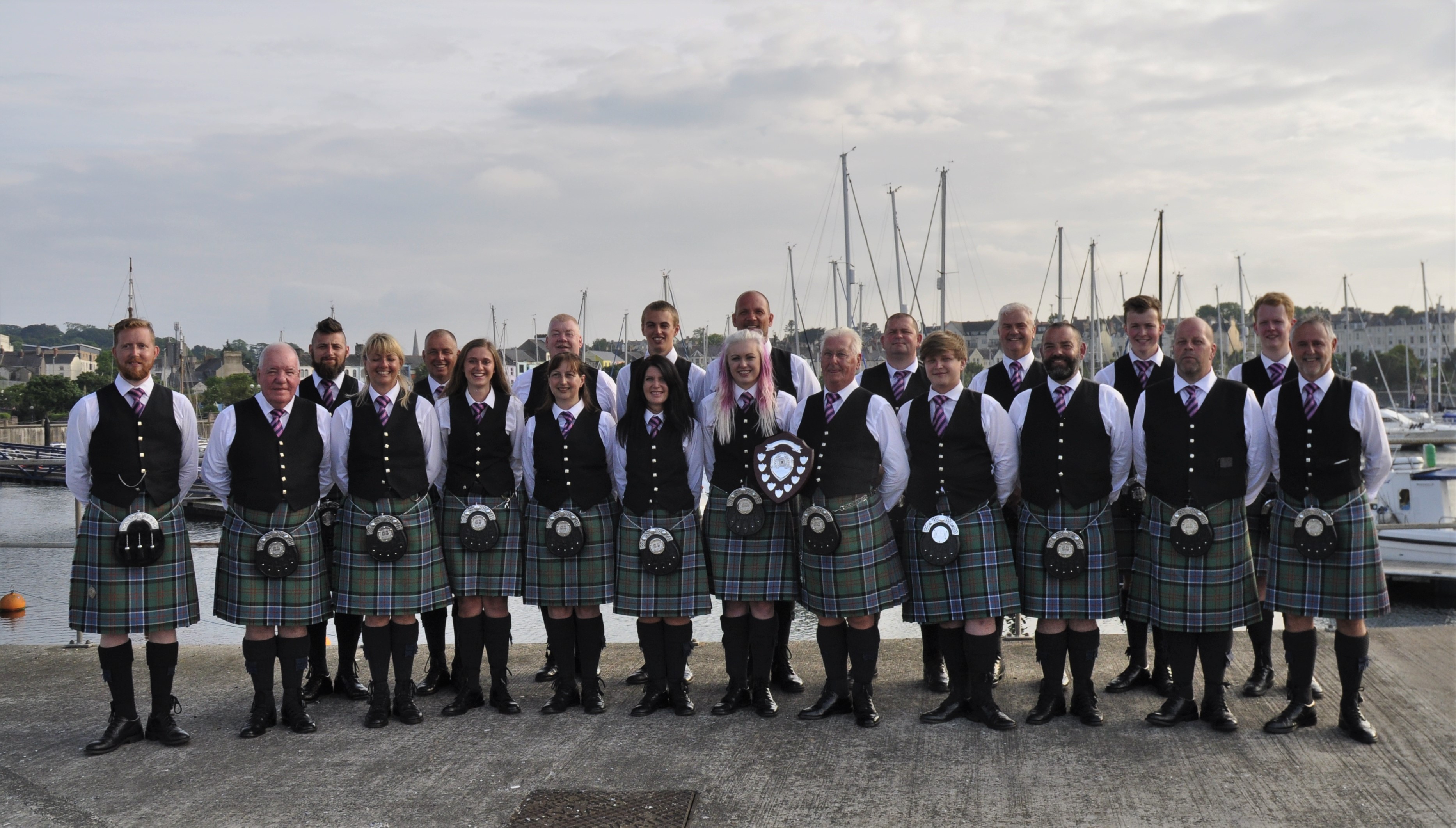