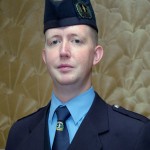 The band are delighted to appointed a new Pipe Major.
29 year old Neil Henderson, who has spent the last 4 years playing with the Vale of Atholl Pipe Band has now joined the band. Neil began his playing career at Boghall and Bathgate where he was taught by the late Robert Martin. He also spent time in the Edinburgh based Scottish Gas Pipe Band before joining the highly successful Drambuie Kirkliston Pipe Band, where he played under Pipe Major Martin Wilson and later Pipe Major Ian Duncan.
There will also be a change of Leading Drummer in the band with Stewart Gardiner taking over from his son Fraser.
The band would like to thank PM Tam Anderson for all his hard work and dedication over the years and are delighted he will continue to teach the weekly learners class at Polmont.

The band are looking forward to a successful competition season in 2012 and would be happy to welcome some new young players to Walacestone, who can contact the band secretary through the website.