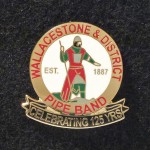 As many may already be aware, 2012 marks the 125th anniversary of the formation of the pipe band. We hope to mark this historic achivement in several different ways and the first of these is the arrival of our specially commissioned enamel badges.
After some debate over its design it was decided to reproduce the now familiar “William Wallace” figure, which has in recent years, attracted much attention on the bass drum heads .
A limited number of these pins should be available to the general public and can be obtained by contacting any band member.