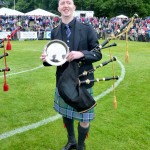 The band produced a decent medley performance to take 3rd place at the European Championships at Forres on Saturday 29th June.
Both the Pipe Major and Leading Drummer were happy with the run, but both agreed the band didn’t quite manage to produce its best in the contest ring. As a positive sign of the band’s ambition, despite a top 3 finish, it was a fairly subdued bus journey home to Falkirk!

The band will be competing again at Melrose on 20th July, then at the
Scottish Championships at Dumbarton the following weekend.