The band got off to a reasonably good start at the first major championship of the season, which was held at Bathgate on 31st May. Despite not quite producing the run they had hoped for, they still managed to make the prize list, finishing in 6th place.
Back to work on the MSR now for the UK Championships in Belfast on 14th June.
PM Neil Henderson can be seen receiving the trophy from West Lothian’s singing sensation, Susan Boyle.
Susan declined to duet with Neil on a quick chorus of “The Broon Coo”
but did appear impressed by his new tie! 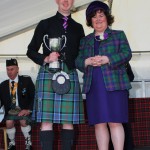