Since the band’s success at Bathgate early in the season they have competed in another two major championships. The UK Championships were held at Sormont Estate in Belfast, Northern Ireland, where a poor break in the middle of the band’s medley pushed them out of the prize list. 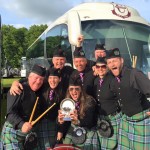 The European Championships which were held in Forres saw the band bounce back with another solid MSR performance. Again, a disappointing place from the ensemble judge kept the band out of the top 6 places, but there was some consolation by the drum corps winning the grade 3B drumming prize.