The band competed at this years championships and played their MSR well in the qualifying heat, which they finished in first place.
They played well again in the final but sadly just missed out on a prize, finishing in 7th place, with the drummers being placed second.
This being the last major championship of the season, the Champion of Champion prizes were also awarded, with Colmcille Pipe band winning grade 3B and Wallacestone in 5th place.
In the drumming, Upper Crossgare were named as the champions in the grade with Wallacestone  finishing in 2nd place.

Well done to all the band. 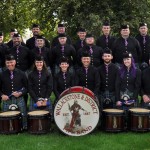