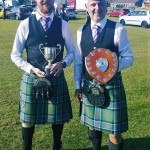 The band failed to play it’s best at the British Championships but still managed to make the prize list in 6th place.
Since then they have managed to pick up a number of prizes at the smaller games where they won the grade 3 contest at Bathgate and were placed second in both grade 3 and grade 2 at Markinch last weekend.
They are heading over to Northern Ireland on Friday morning to take part in the UK Championships at Stormont this weekend and are hopeful of improving on their placing at Paisley.