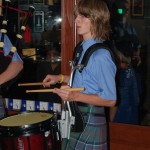 Sadly at the end of the competing season, Leading Drummer Allan Lindsay decided to stand down from his post due to work commitments. Allan hopes to continue playing with the band when he can and has been replaced by Fraser Gardiner who has played with the band for the past few years. Fraser, like many Wallacestone players, has strong family connections with the band, his father, sister, aunt and uncles all having played with the band. The band would like to thank Alan for his hard work and commitment over the past few years and look forward to him leading the singing on the band bus again next season!