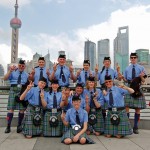 The band has recently returned from a successful visit to China where they were invited to play at the 70th birthday celebrations of ex-pat businessman Nick Watson. The band received a tremendous reception at the party, which also featured musicians who had travelled from Ireland and South Africa to perform in Shanghai. Former Wallacestone drummer and band secretary Alistair Stirling who now lives in Thailand but regularly visits Shanghai on business, also made it to the function to hear the band for the first time in a number of years. Thanks are due again to Nick and his son Alan of Moore & Watson, Falkirk, for looking after the band so well during the trip.