After a steady improvement over the year, the band ended the 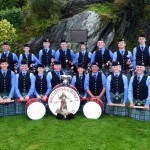 season with a win at the last major contest, held at Dunoon.
Pipe Major Neil Henderson, in his first season in charge, lifted
the Hugh Mathieson Memorial Rose Bowl, a trophy last won by the band
almost 40 years ago, in 1974.
For Neil, who has strong family ties to Dunoon, it was the perfect end to
his first season in charge of the band.
Well done to everyone in band, the hard work has paid off!