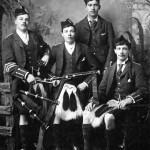 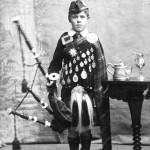 Thanks are due to former tenor drummer George White, who is the grandson of piper Archibald D McLuckie. Archibald and his brothers Thomas and Alexander all played with the band from the 1890’s  to the early 1900’s.
George has come accross several old photos of the band and his relatives, from this early period of the band history and has kindly allowed them to be copied.
One image shows  PM T D McLuckie, his brother Archie and Pipe Sergeant Alexander Malcolm. The 4th player standing to the rear has still to be identified.
Can anyone name him?
The other photo shows a very young Angus Campbell McPherson, who left the band around 1912 to live in Queensland, Australia where he continued his very successful solo piping career.
If you have any old photographs of the band or can help us with information on the band history, please contact us through this website.