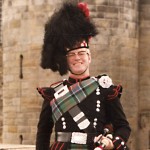 The band members were saddened to learn of the death of  former member Bert Smith, who died on 19th October in Strathcarron Hospice, aged 79.
Bert was a native of Bo’ness and began his piping with the Bo’ness Federation Pipe Band, before joining the British Hydrocarbon Chemicals Pipe Band in Grangemouth. This band, which later became the BP Gramgemouth Pipe Band, had great success under Pipe Major Alex Kiddie. Bert later progressed to Bob Hardie’s Muirhead & Sons band before joining Wallacestone & District in the mid 70’s.
Bert had played along with Pipe Major Tam Anderson in the BP band and was a part of highly successful Wallacestone band of 1980. After finishing playing with pipe bands, Bert concentrated his piping efforts on teaching, with James and Callum Beaumont of Bo’ness being his best known pupils. Bert taught Callum from the age of 7 and continued to give him instruction in light music until he was 18. Bert also entered the occasional “seniors” solo events himself with some success.
Bert’s funeral will be held on Friday 26th October at the Dundas Funeral Home, Bo’ness Road Grangemouth at 1:30 then Old Grandsable Cemetery, Polmont, at 2:15