After gaining 6th place at the Scottish Championships in July the band competed at this years World Championships, held in Glasgow Green on 16th August.
In mixed conditions they put in a good performance in the medley heat, making it through to the 3B final, playing their MSR, this time in heavy rain, finishing a very creditable 6th place.
The drum corps also had another successful day, finishing third in the contest and third overall in the Champions of Champions drumming contest.
Well done to Neil, Stewart and all the band for their hard work over the summer. 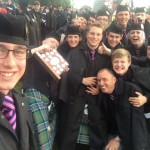