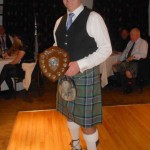 The band held it’s annual ceilidh/dinner dance at the Craiglee Inn, Reddinmuirhead on Saturday 15th of November. A great night was had by all and the band played a final performance of it’s 2014 medley, prior to the ceilidh band getting the dancing underway.

The much coveted “Couper Trophy” which is awarded to a member of the band each season, was awarded so drummer Alan (Joe) Pilley for his efforts during last season.
“Joe” underwent major surgery to replace both his knees just after the UK Championships in June, but was back competing in time for the World championships in August.

Well done Joe – a fantastic effort and a well deserved recipient of the award.