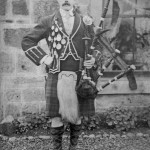 Although the winter months are generally quiet for the band, with engagements few and far between, it seems to be a popular time for family history research.
With the popularity of TV shows such as “Who do you think you are?” and a multitude of websites such as “Ancestry UK” researching a family tree has probably never been more popular.
The band was contacted a few days ago by a the Great Granddaughter of Pipe Major Thomas Davidson McLuckie, who became the band’s second pipe major, back in the 1890’s.
It is hoped that some new information can be gleaned about the early days of the band and the three McLuckie brothers who played with Wallacestone then.
A superb new photograph has already been added to the band’s archive and shows  Pipe Major McLuckie with a fine collection of medals, probably dating back to around 1900.