The band members were sad to hear of the recent death of Erwan Ropars, the former ‘penn soner’ of the Bagad Kemper. Erwan was a hugely talented piper and led his band to 10 Breton Championships during his 25 years in charge.
The Wallacestone pipe band played several concerts along with Bagad Kemper in the 1980’s, with the bagad visiting Scotland in 1987 as part of Wallacestone’s Centenary celebrations.
His funeral in Quimper was attended by around 2000 mourners, 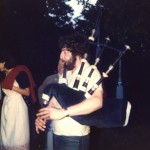 many who brought pipes and bombards to pay tribute to Erwan.