The band will be heading across the water to Northern Ireland on Friday to take part in the UK Pipe Band Championships. This is a relatively new contest, which was brought in a few years ago to replace the Cowal Gathering as one of the five major contests of the year.
The Championship will be held in the grounds of Stormont House and in recent times has been a happy hunting ground for the band.
After being placed second in grade 3B in 2016, they followed it up with first place in grade 3A. Returning in 2018 and now playing in grade 2, they will be doing their best to once again bring home a trophy.
Good Luck to Neil, Peter and the rest of the band. 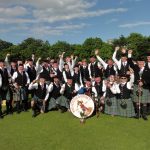